Master Breeder On The Road

I have just got home from the week-long breeding road. I'd like to call it great success........

Last year, my businesses were around my home town. It was a very good way to get started. In this second season, suddenly yet surely it expanded to an extended road trip. Whatever we talk about, either cattle related, fly-fishing or any other things in life, the whole trip ended as one of a few examples of "everything went well"!!
First task: SCHEDULE. This is actually easy as based on conversation and communication among people involved in. I was blessed with working with very good people!!
Then here come other factors: CATTLE & WEATHER. We always plan and work for the best when we synchronize groups of cattle but every now and then we have to face some disappointments and unpredictable situations. Then who can expect Montana weathers for his/her favors/wishes? Well....... even those unpredictable factors worked very well for me and people I worked with. Let's look!!

Heading Eastern Montana. Hat and clipboard on the dash are must thing for the cattle breeder on the go!! 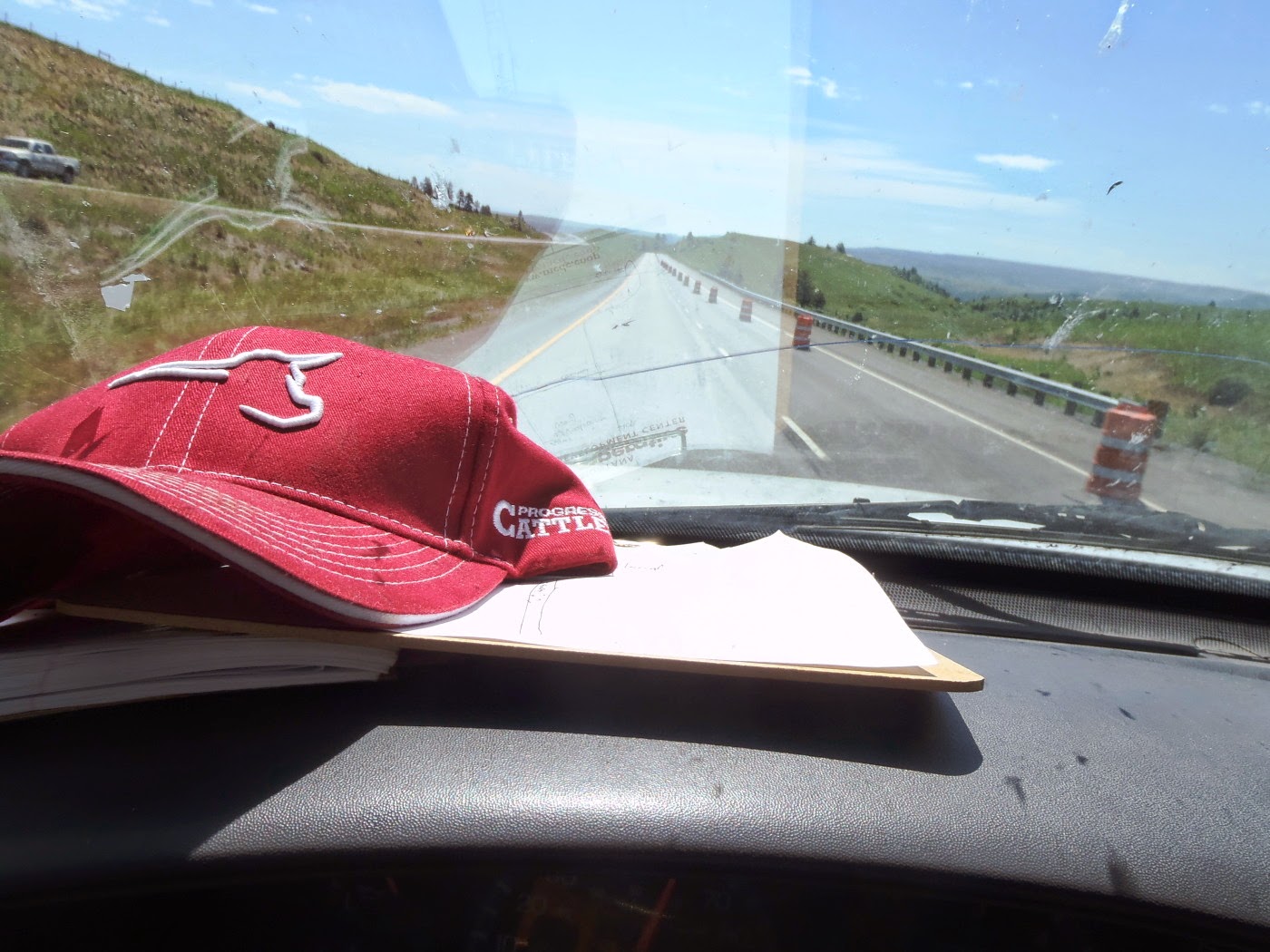 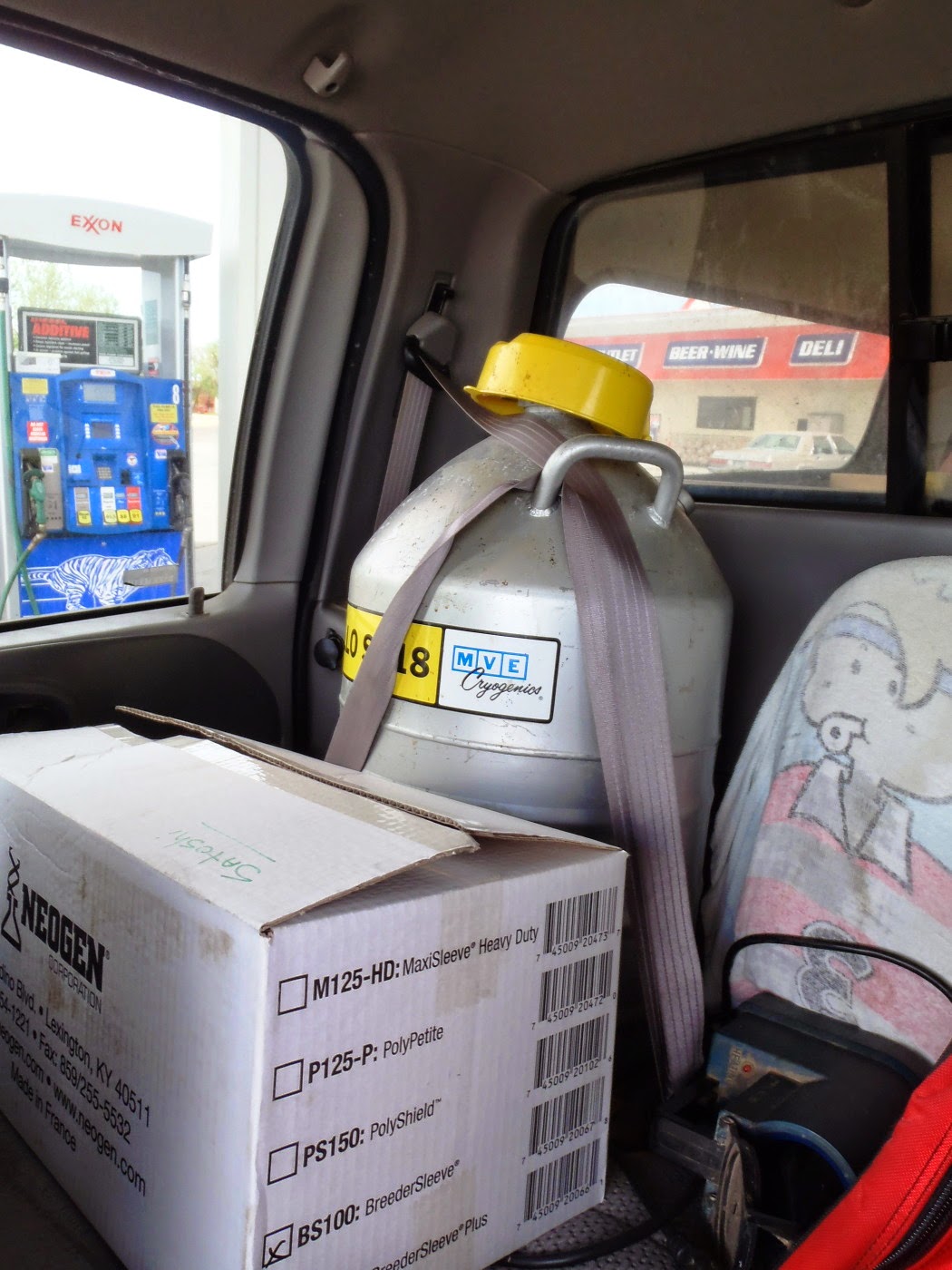 My first destination was Felton Angus Ranch (Tongue River Division) in Ashland, MT.
As I checked in I briefly looked around. I just reminisced my cowboy days in Eastern MT long time ago (another story). Looking at buttes in the direction of Miles City from the corral, I felt that Eastern MT was greener and prettier than Western MT at this time of year. 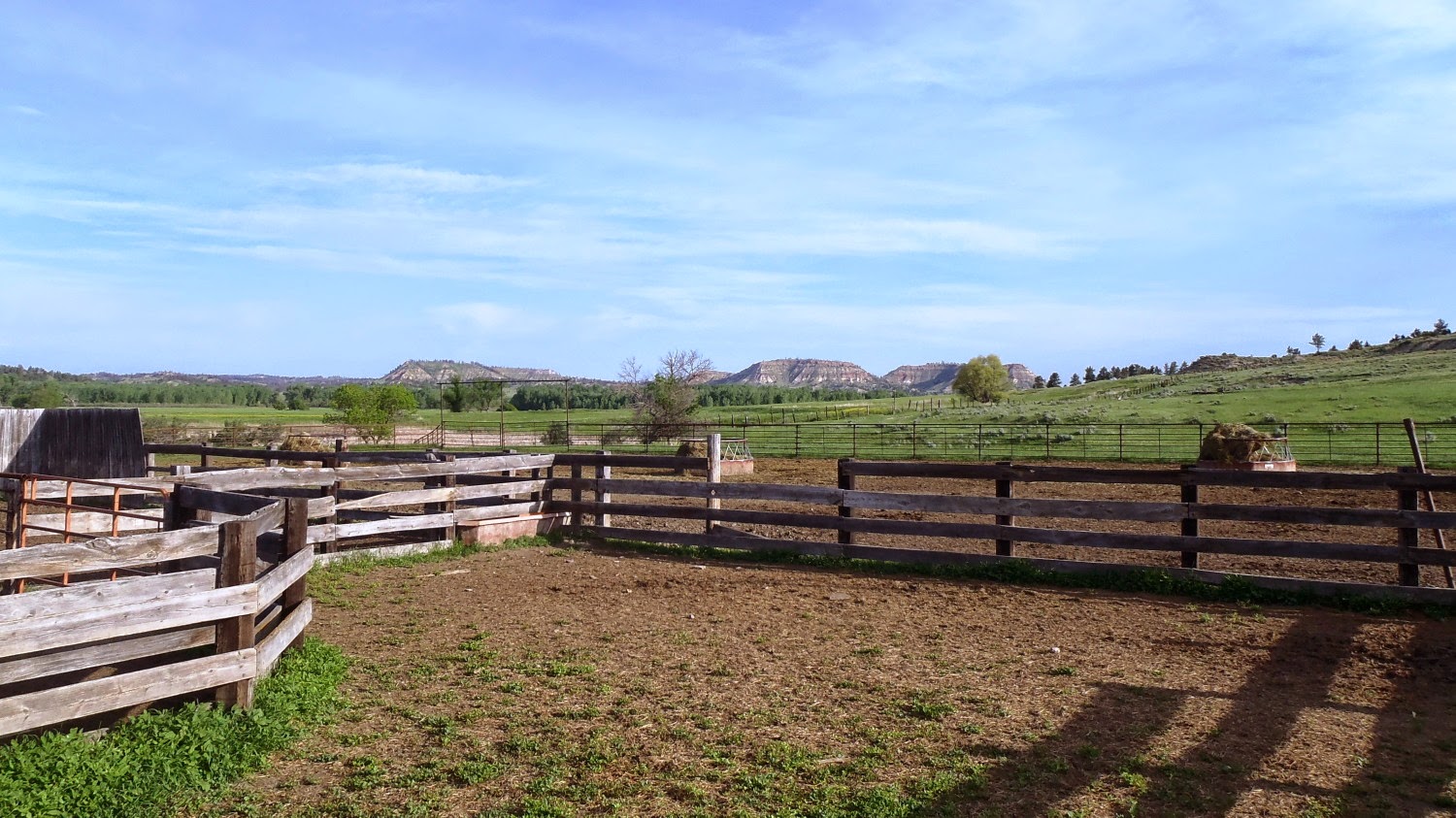 Heifers responded very well to our synch programs.
At the dawn of the third (& last) breeding day,  fogs and strange clouds were surrounding the ranch and the area.......... Weather forecast was predicting some severe storm (any kinds involved!!) in the area............ Little did I know this was the omen........ Our breeding went well. However, I was breeding the last few heifers under the hail.......... 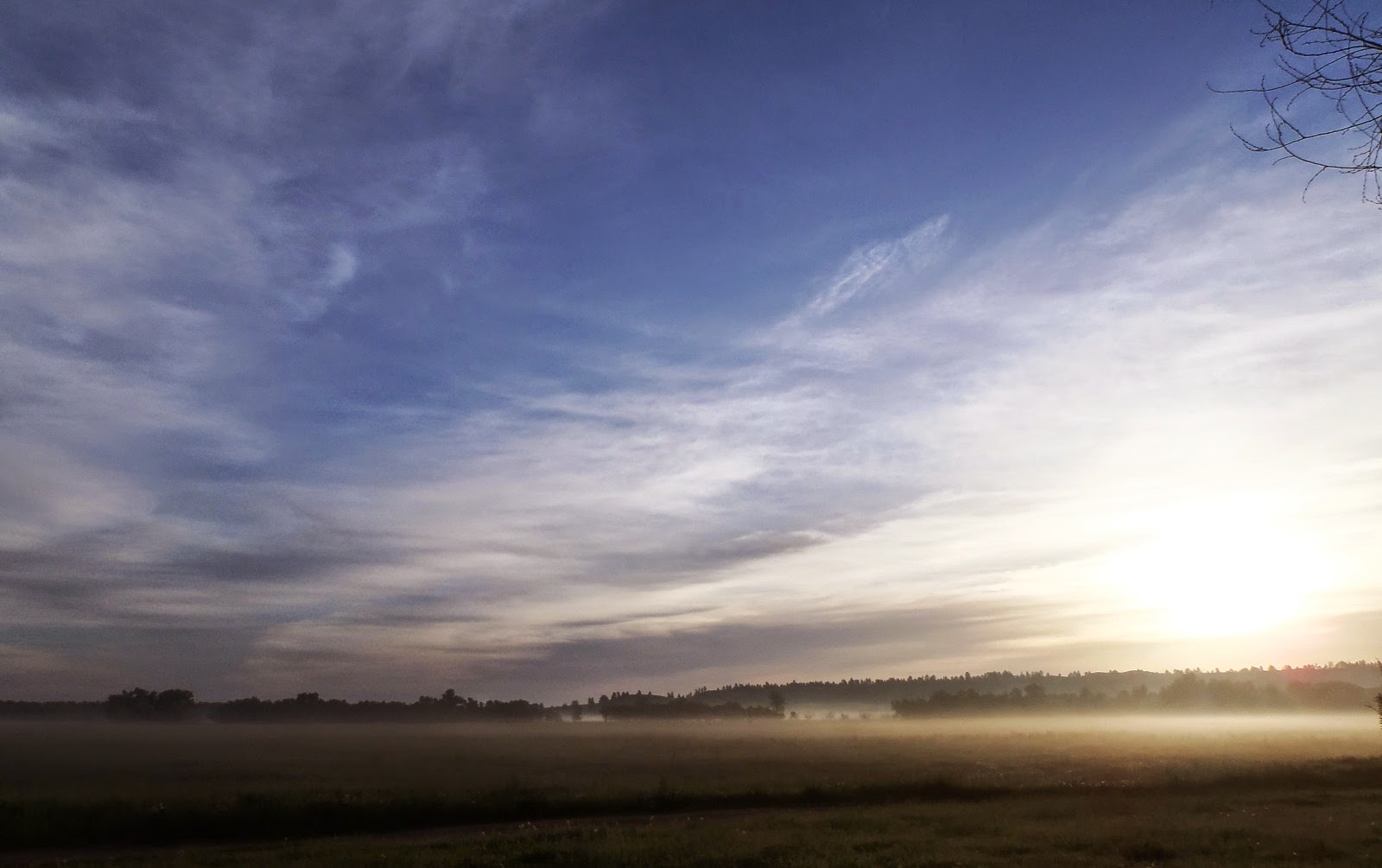 My next destination was a feedyard between Park City & Columbus, MT. Ranch Manager and I have been in touch since March and we gave a shot for his Charolais based herd.

Before talking about my job and result, I kinda like this picture myself. The feedyard is right along Yellowstone River. As Absarokee Range slopes down toward east, the area shows one of the most unique and iconic wilderness of Montana, if not the entire West.

White/gray hide cows in the feedlot is easy to work with when they are in "heat". As they are playing or being played, their hides are easily coated by mud and soils!! 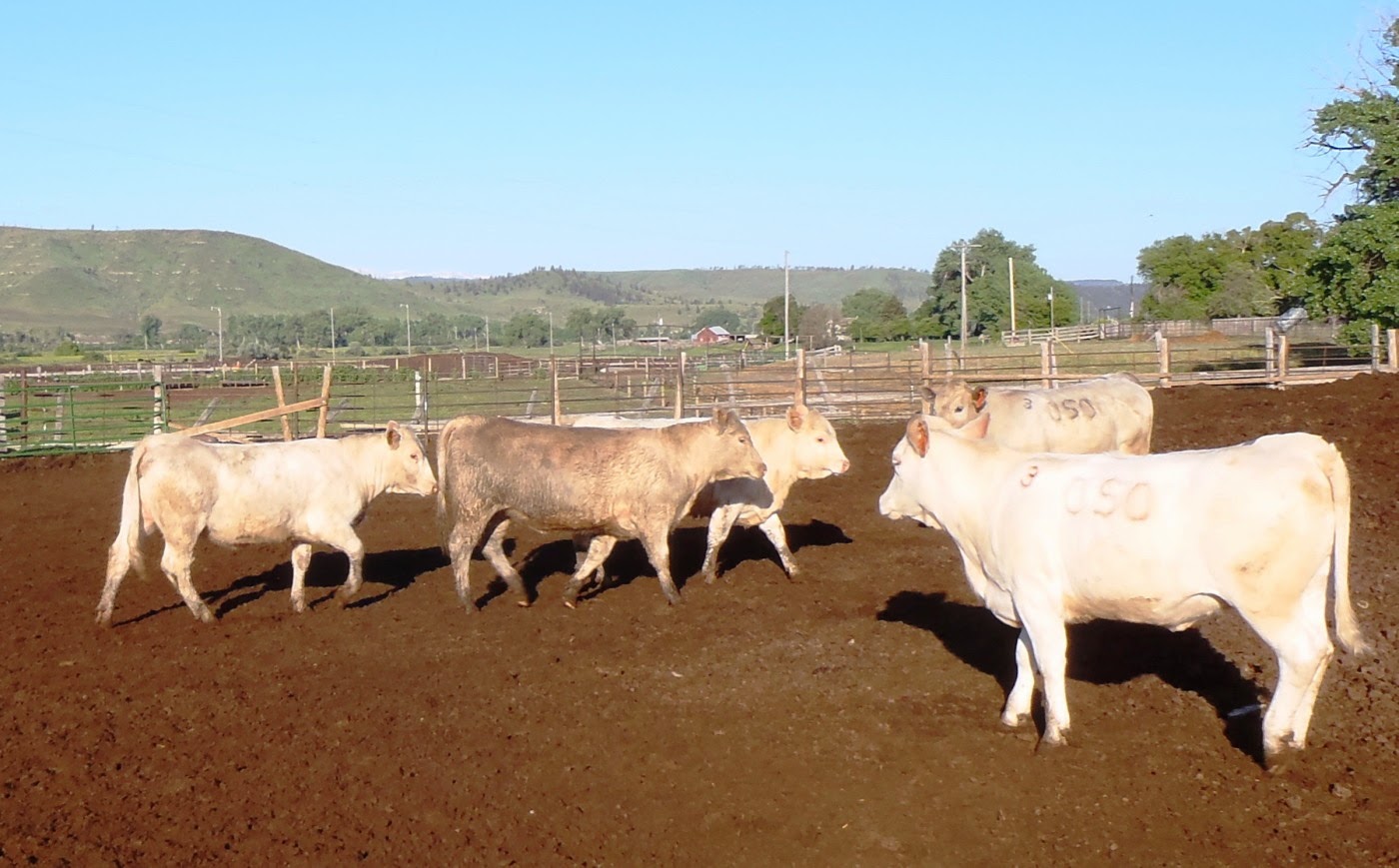 These heifers responded to our Synch program just as we expected but it ended more than we imagined or expected.............. Believe or not, 82 heifers out of 82 heifers showed visual & physical signs of estrus!! Let me remind you that these heifers are real "range-cows", not under any special managements or treatments. They are just who they are. Really.


So here's the program I suggested to ranchers.

This season, since I was notified a lot in advance, ranchers and I decided to work on this protocol. Apparently this one takes long and needs planned accordingly. Yes, CIDR is considered expensive among any other pharmaceutical products for a per-animal base. Also each day in the schedule can be labor intensive. But reward = tightness of synchronization can be some of the best among any other protocols.